Yesterday I was on a panel discussion on surveillance organized by quintessenz and emergence of projects. It was a lively discussion, which left me with more open questions than answers though. Reinhard Kreissl (sociologist of law and criminology) and Markus Kainz (quintessenz, moderator) easily agreed on the bad guys (usual suspects like the state, government, Google, Billa) and identified civic disobedience as an appropriate way to fight surveillance. Practical examples of such guerilla activities were swopping Billa Vorteilscards or defrauding the population census (by reproducing sheets and feeding them with wrong data). Even though I like the idea of creating a critical mass of disobedient citizens to mess with statistics, I think it’s not that easy anymore in times of digital surveillance. Cheating with sheets of paper and swopping discount cards is easy compared to messing with big data and algorithmic logics. The reasons for that are multiple: 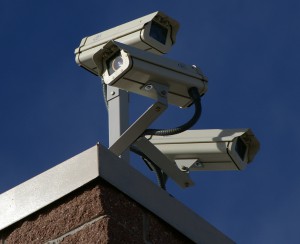 First, digital surveillance is almost seamless. As Markus put it: “We are surveilled not once or twice, but various times”. Combinations of data from cell phones, surveillance cameras, credit cards, and digital tools like search engines and social networks make it hard to escape from your own data body. The data points we leave are simply too many and too heterogeneous. Here, I agree with Manfred Kreissl: “We are leaky containers”.

Second, most individuals do not have the knowledge and technical know-how to mess with such complex digital networks. And why should they? Most people, the majority, most probably, is pretty happy with how things are. They get discounts with their Billa card, they get free – and pretty good – online services from Google & co, they have become used to or even grew up with extensive surveillance and advertising so that they don’t care anymore. That does not necessarily mean that people agree with all these data collections, it just shows that people take on a pretty fatalistic attitude in their daily lives. And yes, some people don’t care at all or simply like contemporary consumer culture – just like one of my interviewees, working in human design and engineering, phrased it: “I think the driving force behind this information economy is our, kind of, probably, possibly a little bit unhealthy desire to just keep consuming, and communicating, and producing at such a frenzy rate.” (Mager 2012: 10)

And, finally, even if people are discontent with the current surveillance state, why should it be the responsibility of the individual to fight a system that even politics and regulations seem to face with powerlessness? And how could we even step out of these powerful networks of surveillance? A quote by Scott Lash came to my mind when cycling home from the discussion: “The point that this book has tried to make is that we can no longer step outside of the global communication flows to find a solid fulcrum for critique. There is no more outside. The critique of information is in the information itself.” (Lash 2002: 220). Lash’s Critique of Information may be seen as an explanation for the digitization of political action. Even politics has become a matter of mouse clicks. Signing an online petition, liking a political group, sharing a critical initiative, all that is political engagement these days. The good thing though, and I think that’s something we should not forget, is that also new social movements are emerging from these activities, Occupy Wall Street, the Arab Spring (whether successful in the end or not), or Uni Brennt have (also) been organized online and have ended on the streets.

So what I’m trying to say, I guess, is that things are more complicated than they seem at first sight. Of course, surveillance states, Google, Billa and other players are spying on us and (ab)using our data and that’s bad. No doubt about that. Blaming them, however, is not enough in my view. Rather, it’s important to understand power relations and dynamics that are stabilizing them. Political decisions, media debates, but also our own behavior that is essentially feeding their power. Only then proper ways out may be found. Ways out that may even be digital. Times have changed since 1968 and so have we.