A new network initiative has been circulated in mailing lists over the past couple of days. It’s called “Unlike Us. Understanding social media monopolies and their alternatives” (Concept: Geert Lovink (Institute of Network Cultures/HvA, Amsterdam) and Korinna Patelis (Cyprus University of Technology, Limassol). Its critical approach to social media definitely deserves a #goodtosee blog post! The central aim of the initiative is to establish a network of artists, designers, scholars, activists and programmers who work on ‘alternatives in social media’. Planned are a series of events, a reader, workshops, online debates, campaigns etc. By pursuing these initiatives Unlike Us intends to both analyze the economic and cultural aspects of dominant social media platforms and to propagate the further development and proliferation of alternative, decentralized social media software, as may be read on its website. In doing so it wants to go beyond the culture of complaint and ask overarching questions about how to tackle fast-emerging monopoly powers:

Without falling into the romantic trap of some harmonious offline life, Unlike Us asks what sort of network architectures could be designed that contribute to ‘the common’, understood as a shared resource and system of collective production that supports new forms of social organizations (such as organized networks) without mining for data to sell. What aesthetic tactics could effectively end the expropriation of subjective and private dimensions that we experience daily in social networks? Why do we ignore networks that refuse the (hyper)growth model and instead seek to strengthen forms of free cooperation? Turning the tables, let’s code and develop other ‘network cultures’ whose protocols are no longer related to the logic of ‘weak ties’. What type of social relations do we want to foster and discover in the 21st century? Imagine dense, diverse networked exchanges between billions of people, outside corporate and state control. Imagine discourses returning subjectivities to their ‘natural’ status as open nodes based on dialogue and an ethics of free exchange. 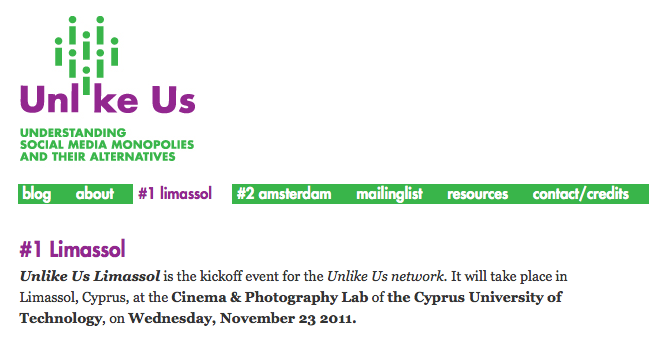 The kick-off event will take place in Limassol (Cyprus) and focuses on how the facilitation of free exchanges and the commercial exploitation of social relationships, which lie at the heart of contemporary capitalism, belly social media (23 November 2011). For more infos on the kick-off meeting go to this page or subscribe to their mailing list.

I’m really happy to see a more critical approach to social media and will most certainly follow their activities! The questions they pose are highly relevant in an age of monopolist, for-profit internet technologies and go far beyond social media. Similar claims could – and should – be made about search engines, as I discussed in my recent article “Algorithmic Ideology“. The initiative Unlike Us further nicely relates to discussions we had at the Symposium Knowledge Machines between Freedom & Control in Hainburg (see also this blog post), where we arrived at similar questions and the need to think about and work on alternative technologies accountable to “the common” rather than monopolist companies making profit with our content and data. If you feel the urge to articulate your discomfort and complaints about Facebook, Google & co. and their privacy policy & business models you are more than welcome to contribute to the manifesto we created as part of the Hainburg event. It’s titled “Disobedient Data Bodies” and may be found here. Enjoy reading it, sharing it, continuing it, or adding some fancy background image since it’s still a little plain & white for a manifesto, as you can see below 😉 – both German & English texts are welcome! 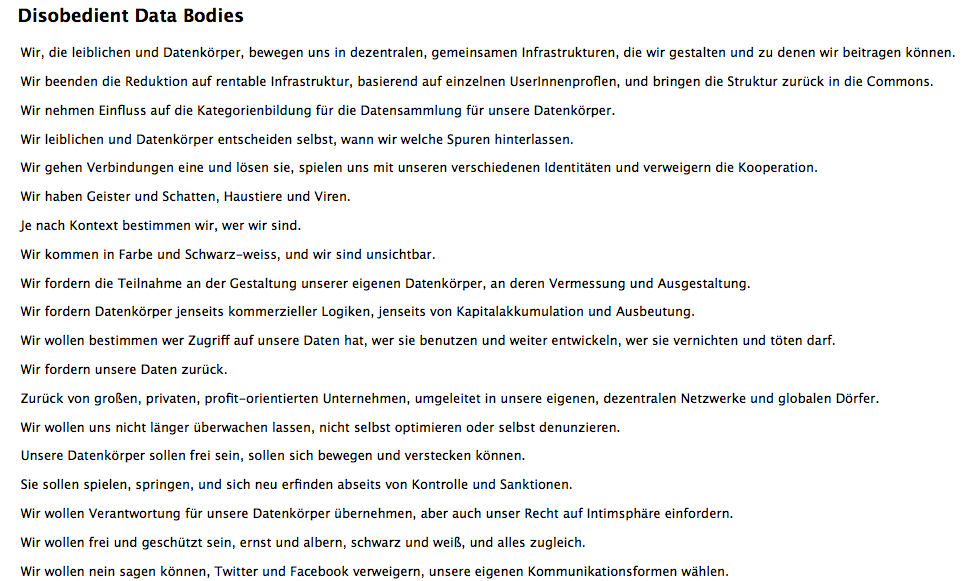