Preparations have already started for the upcoming conference “Media Places”, that will take place at the HUMlab, Umeå University/ Sweden, 9-11 December 2010. Within the broader context of what has been labeled the “Digital Humanities” this conferences aims to investigate the interplay between media, technology and location. “A basic premise is that the social, cultural and spatial are deeply embedded, and that space is constantly structured and produced by those of who occupy it”, as may be read on the conference website. To approach phenomena at the intersection of media, technology and place the conference brings together cultural historians, architects, screen researchers, art and creative directors from digital media production industry, visualization experts, design researchers, sociologists, gender researchers, and game industry representatives. This broad range of scholars with different backgrounds shows the interdisciplinary dimension of topics the growing field of Digital Humanities deals with.

Details on the program and international guests from top-class institutions in the field of Digital Humanities may be found here. I’m already looking forward to an exciting three-day conference in the far north of Sweden 😉

According to Wikipedia Surströmming, “known colloquially as Scandinavian rotten fish, is a northern Swedish dish consisting of fermented Baltic herring. Surströmming is sold in cans, which often bulge during shipping and storage, due to the continued fermentation. When opened, the contents release a strong and sometimes overwhelming odour, which explains why the dish is often eaten outdoors.”

Despite its scary description we decided to try – what we called – the stinky fish nevertheless. Following the advise to eat Surströmming outdoors we took it to the woods, together with other ingredients the fish is supposed to be eaten with. The purpose of this undertaking was to actually eat the fish.. the outcome of our adventure may be seen in the movie below. I hope it does not hurt Swedish feelings, but as a lot of Swedes don’t like the fish either, it should be ok, I hope. Especially as it also well-documents the HUMlab postdoc crowd! At least parts of it, as Charlotte has left us in the meanwhile.. we miss you!! & thanks for editing the film!

& thanks also to Michael, who documented the whole fish procedure with the camera (and unfortunately left us too!!).

Tip: When watching the film, please consider that I actually said, that I swallowed the fish for a moment – a clear sign of the fish’s ability to confuse my brain..

P.s. the movie was shot about a month ago, the present snow-situation is like this: 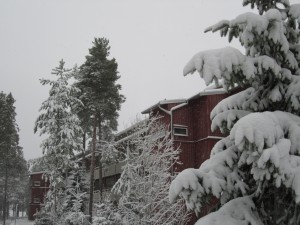 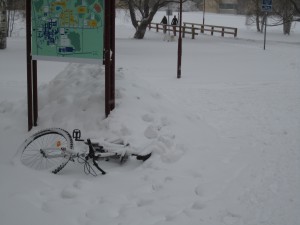