This is the video that has been made at the Digital Labor conference, NYC. Enjoy watching it and check out the other videos too! (there are really great ones!)

Astrid Mager at #DL14 http://digitallabor.org from The Politics of Digital Culture on Vimeo.

This was an awesome publication process! I submitted the article in 2012, just before Liam was born. Assuming the review process would take forever, as it usually does, I thought submitting the paper before giving birth is very clever. Unexpectedly the reviews were back even before the child arrived. However, as I was pretty busy since then I resubmitted the paper only one week ago. What happened then was really amazing. I sent back the article on February 11, 5.05pm. I got the letter of acceptance from the editor, Christian Fuchs, at 10.57pm. The paper was edited, layouted and published the next day, February 12, 12.02am. This is very exceptional!!! And very satisfying too

There is nothing more tiring than time periods of months and years between the date of acceptance and the date of publication. So I really like to thank Christian for this speedy handling of my paper! & I highly recommend publishing in his journal TripleC: Communication, Capitalism & Critique!!! (Besides, what other journal recommends listening to a “non-commercial indie rock-online radio station” on its homepage?)..

This article conceptualizes “algorithmic ideology” as a valuable tool to understand and critique corporate search engines in the context of wider socio-political developments. Drawing on critical theory it shows how capitalist value-systems manifest in search technology, how they spread through algorithmic logics and how they are stabilized in society. Following philosophers like Althusser, Marx and Gramsci it elaborates how content providers and users contribute to Google’s capital accumulation cycle and exploitation schemes that come along with it. In line with contemporary mass media and neoliberal politics they appear to be fostering capitalism and its “commodity fetishism” (Marx). It further reveals that the capitalist hegemony has to be constantly negotiated and renewed. This dynamic notion of ideology opens up the view for moments of struggle and counter-actions. “Organic intellectuals” (Gramsci) can play a central role in challenging powerful actors like Google and their algorithmic ideology. To pave the way towards more democratic information technology, however, requires more than single organic intellectuals. Additional obstacles need to be conquered, as I finally discuss.

Last week I attended an excellent conference in Uppsala/ Sweden organized by Christian Fuchs and colleagues. The conference was concerned with “Critique, Democracy, and Philosophy in 21st Century Information Society” (all conference abstracts could be found online) or “Marx is Back”, as the opening panel suggested. Accordingly, numerous scholars from various disciplines – old and young – discussed Marx, Marcuse, and many other thinkers in the tradition of Critical Theory in the context of new media and Internet technologies. In fact, developing critical theories of social media was the main purpose of the gathering. 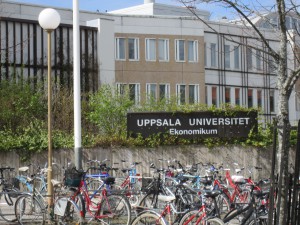 Contrary to other Internet-related and social media events, this conference was hence saturated with philosophy, theory and critical thinking. Theoretical papers were mixed up with empirical studies scrutinizing corporate Internet services including big players like Google, Facebook and co., but also alternative technologies such as Diaspora, Crabgrass and others. Issues discussed ranged from user exploitation, commodification of social relations, free labour, knowledge workers, crowdsourcing of surveillance, privacy, data protection, ideologies, capitalist modes of production, creation of surplus value in the digital age, pratices of resistance, revolution, social movements, ethics 2.0, circuits of struggle, the commons, participation, and the long march towards a sustainable, democratic information society. 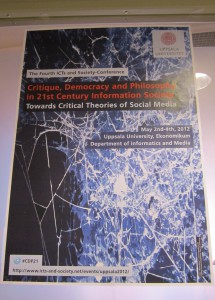 The line-up of keynote speakers was impressive! I particularly enjoyed the following lectures: by Vincent Mosco, who posed the central question whether knowledge workers will unite and suggested to focus on strategies and tactics for activism. By Graham Murdock, who talked about the privatization of the commons and the promotional enclosure of everyday life. By Charles Ess, who analyzed privacy and collective property in the context of Western and Eastern developments. By Christian Fuchs, who underlined – once again – that Marxian thinking is crucial in contemporary informational capitalism and hence advised Castells and Jenkins to read Marx in order to develop more critical concepts. By Trebor Scholz, who talked about the Internet as playground and factory and pictured us, the users, as “renting the product of our own labour” and demanded hybrid (public/ private) solutions for the future. By Mark Andrejevic, who made us think about the “big data divide”, predictive analytics, and the question who has access to big data (corporations) and who has not (e.g. researchers). By Andrew Feenberg, who conceptualized the Internet as a site of struggle between the consumption model and the community model and suggested (following Marcuse) to “enter the institutions and contest them from within” – whether that would also include entering corporations and contesting them from within remained open though. For the keynote talks I didn’t mention – because I missed and/ or treated them shabbily see Christian Fuchs’ comprehensive article on the tripleC website (Journal for a Global Sustainable Information Society). 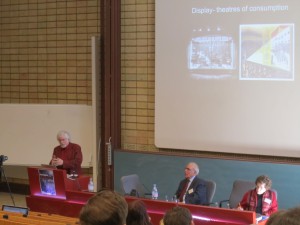 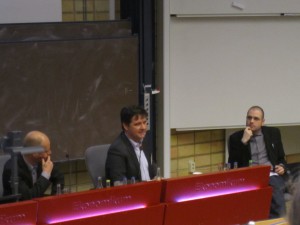 The parallel sessions were yet not less interesting! (Again, the list won’t be complete since I didn’t attend all of them.) I liked the “Antagonistic Lives of Knowledge Workers” and its discussions on knowledge struggles on web 2.0 platforms  (Brian Loader), affective labour and self-promotion of young academics on Twitter, Blogs & Facebook (Mike Frangos) and Romanian journalism in a digital era (Romina-Gabriela Surugiu). “Surveillance 2.0” featuring an excellent talk on the ideological packaging of ICTs (Heidi Herzogenrath-Amelung and Pinelopi Troullinou), empirical case studies on social media use & privacy in Austria (Verena Kreilinger and Thomas Allmer) and, last but not least, a presentation on theorizing social media policing mentioning amazing – and truly frightning – cases of crowdsourcing surveillance such as the Internet Eyes in the UK (Daniel Trottier). Finally, my own panel “Commodification and Ideology” was really cool; covering, among other issues, time conflicts and global capitalism (Wayne Hope), corporate social (ir)responsibility and its problems (Marisol Sandoval), and the alienated labour of academic publishing (Wilhem Peekhaus). Moreover, I got great feed-back and food for thought after my own presentation on algorithmic ideology including comments on hierarchical features of Žižek’s theory and the need for democratic algorithms and alternative (net) politics – Christian Fuchs would call it Communism, I suppose. 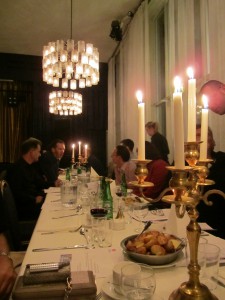 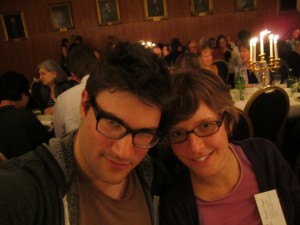 Accordingly, at the conference dinner the Internationale was played and everyone stood up to it. A truly amazing conference, as I said. Thanks to everyone – Christian, Marisol, … – who made this event happen!!! I’ll be there for the next one (assuming there is another ICTs & society conference since there were other events in the past; see once again Christian’s review)! Finally, it was great meeting Ramon Rodriguez-Amat and Katharine Sarikakis from the Communication Studies department in Vienna (let’s unite indeed!!!) & it was fun hanging out with Mike in Stockholm.

I just got an email that the abstract for my talk “Defining Algorithmic Ideology: Using ideology theories to understand and critique corporate search engines” has been accepted for presentation at the Critical Social Media/Information Society Conference in Uppsala. The keynote speaker line-up is impressive including Vincent Mosco, Andrew Feenberg, Charles Ess, Christian Fuchs, Trebor Scholz, Ursula Huws talking about “Virtual Work and the Cybertariat”, and many more… I’m sure it’s gonna be an exciting event & I’m glad that I’ll be part of it!

Also, going back to Sweden in spring will be great! – I hope to see Mike Frangos there too!!! Anyone else? Just drop me a line..

& that’s how I’ll use critical theory to define Algorithmic Ideology:

Corporate Internet technologies like Google, Facebook and co. have been described as mirroring the “Californian Ideology”. Google, in particular, has been interpreted as a paradigmatic example of a company deeply rooted in the economic culture of Silicon Valley with a strong belief in information technology and the free market. While the concept of the Californian ideology helps to understand this newly arising techno-fundamental business culture, it fails to critique corporate search engines and their capitalist ideology. Big, universal search engines should not merely be seen as technical solutions for societal problems, as they often are – most importantly by Google itself – but rather as incorporating a “new spirit of capitalism” (Boltanski and Chiapello 2007) and exploitation schemes that come along with it. Previously, I coined the term “algorithmic ideology” to show how the new capitalist spirit gets inscribed in search engines by way of social practices.

In this paper I aim to define the term algorithmic ideology. Drawing on critical theory I argue that ideology could be a valuable tool to understand and critique the commercial dimension of search algorithms and their power in contemporary society. Following Althusser (1971), for example, I exemplify how the capitalist ideology gets materialized in corporate search engines and algorithmic business models. Through their algorithms corporations like Google exert their power, indoctrinate users, and create desire. By providing their services for free (and collecting user data instead) they extend their hegemony (Gramsci 1971) by attracting and integrating users in their “capital accumulation cycle” (Marx 1867, see also Fuchs 2011). In turn, user communities may be seen as (unconsciously) practicing and stabilizing the capitalist ideology by incorporating search services in their daily online routines and turning to Google & co. for advertising and consumer purposes. This way the “culture industry” (Horkheimer and Adorno 1969) and its ideological superstructure are inscribed in, transformed, and spread through supposedly neutral search algorithms.

This analysis points out how ideology theories could be used to develop a notion of algorithmic ideology encompassing materiality, institutions, and practices anchoring and reproducing contemporary capitalism. Instead of a mere belief in technology and global business, algorithmic ideology should function as an analytical framework to analyze and critique corporate search engines and the social order they perpetuate. Only when understanding how present-day search engines further global capitalism resistance and strategies for achieving alternative algorithms for a mores sustainable and democratic information society could be developed in the future. Whether a “radical repoliticization of the economy” (Žižek 1999) may be a first step into this direction and what role the state could/ should play in this undertaking will be finally discussed.

This research is carried out as part of the project “Glocal Search. Search technology at the intersection of global capitalism and local socio-political cultures”, funded by the Jubiläumsfonds of the Oesterreichische Nationalbank (OeNB).