In the last couple of months I have done extensive interviews with 17 people more or less directly involved in the social construction of search engines. The interviewees ranged from search engine engineers, people working in information retrieval, search engine optimizers, content providers and marketers, but also proponents from the broader societal context including policy makers, jurists, activists, journalists, and critical internet scholars – from the German and US-American context. All these people shared and discussed their different viewpoints on search engines with me. The material I’ve only recently started to analyze looks extremely interesting – thanks to all of them! First insights will be presented next week at the Wits School of Arts, University of the Witwatersrand/ Johannesburg!

For now, I’d like to share some kind of by-product of these interviews with you: the landscape of search engines my interview partners depicted. Independently from their heterogeneous standpoints and backgrounds they all drew a pretty similar picture. It may best be described with the term “Googlepoly”, which was coined by Pasquinelli in the book “Deep Search” (which I highly recommend by the way!). 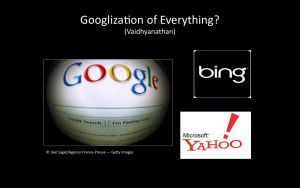 All of my interview partners described Google as THE actor on the market, the “monopolist” or “oligopolist”. Some of them further referred to Microsoft’s Bing – who bought Yahoo just recently – as a possible future competitor, while others doubt that. Further, ASK was mentioned from time to time. But what search engines exist apart from these big, highly commercial players? Are there alternatives out there?

Having been asked about the broader landscape of search engines my interviewees drew a more complex picture, I’d like to share (and strengthen) here: 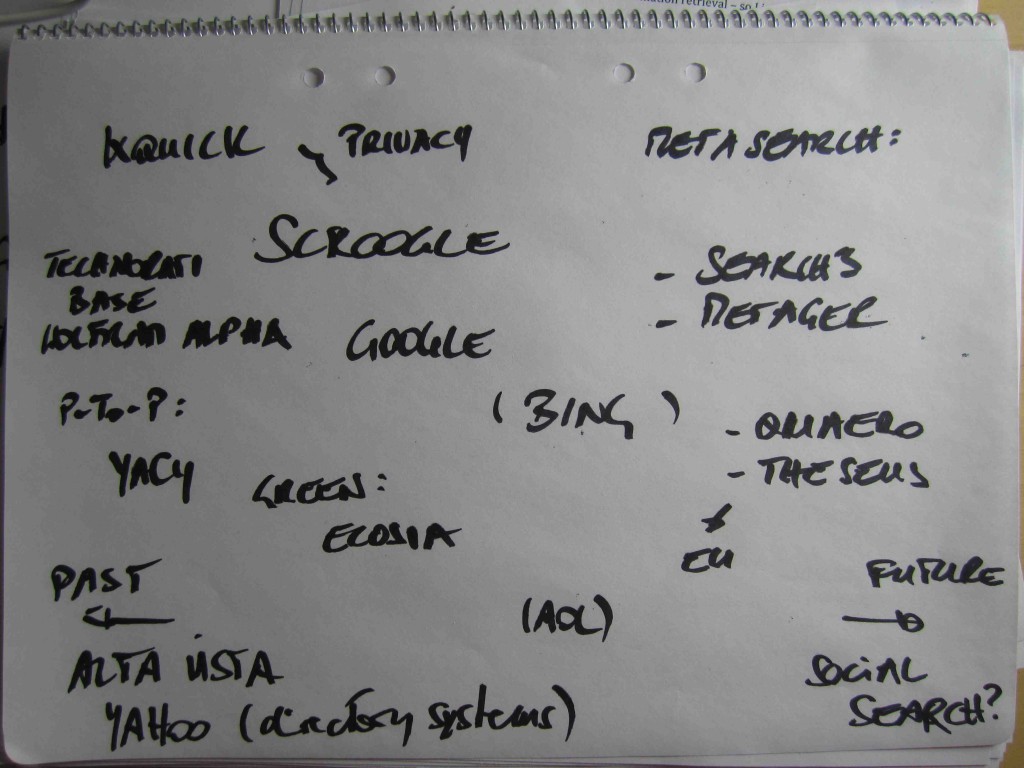 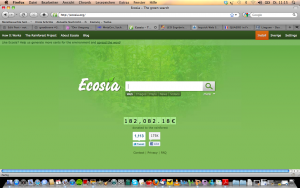 Similarly, other search tools draw on/ use/ exploit big commercial players and their algorithms. Especially the so-called “green” search engines have become popular in this respect. ECOSIA, for example, describes itself as a “social business dedicated to environmental sustainability via the donation of revenue to the world’s most effective rainforest protection programs”. Within broader debates on climate change ECOSIA & co. claim to donate parts of its advertising revenue to WWF’s work in the rain forest. The fact that ECOSIA is powered by the BING/ YAHOO complex and employs its search algorithm, however, limits its “green” purpose drastically since ECOSIA – and all the other green search engines – use the same computer power and create the same CO2 emission as BING, GOOGLE or any other search engine. 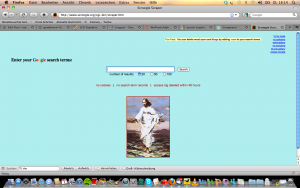 Further, SCROOGLE is an interesting and humorous initiative. SCROOGLE basically exploits GOOGLE through using its algorithm, while protecting users’ privacy through encrypting users’ data. It makes their search query anonymous so to say (and makes fun of Google through displaying all kinds of comics, pictures etc.). Similarly, the meta-search engine IXQUICK, known as STARTPAGE in the US, is dedicated to protect the users’ privacy. Contrary to SCROOGLE it has its own algorithm and follows a quite elaborated business philosophy and policy.

In addition to these universal search engines there is a range of special interest search tools such as the Blog search engine TECHNORATI, the language search tool LINGUEE (German-English), BASE dedicated to search scientific documents, or WOLFRAM ALPHA, which aims at making “systematic” and “expert-level” knowledge accessible to the broader public. While it has its media hype at the beginning, there is not much said about WOLFRAM ALPHA anymore – most probably because it works best with mathemetic formulas, which are not amongst the top  search queries according to trend graphs. Further, the peer-to-peer search engine YACI may be seen as a real alternative to commercial, top-down search companies. YACI is a de-centralized search engine that wants to “achieve freedom of information through a free, distributed web search which is powered by the world’s users”. 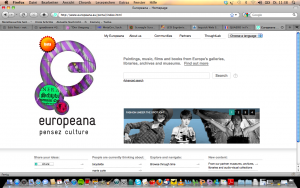 Finally, there are European initiatives to challenge US-based companies such as the French search engine QUAERO and the German search technology THESEUS. Both of them received funding from the public sector and the EU and both of them did not take off yet, quite on the contrary. Recently, another European initiative, EUROPEANA, aiming at ordering “Europe’s cultural and scientific heritage”, has been introduced. Maybe this one will succeed in introducing a competitive European search engine, you never know.

Most of my interview partners further referred to social media such as FACEBOOK or TWITTER as potential competitors on the search market. Whether GOOGLE & co. manage to integrate more social data into their searches or whether they’ll be outpaced by social networks and their recommendation system remains to be seen in the future. One interview partner described it as a “battle between man and machine”.

This rich repertoire of search technologies – plus the ones I haven’t talked about here – shows that there are indeed alternatives to the “Googlepoly” out there. Whether your goal is to save your private data, to get more diverse search results, to create a more “green IT”, to take part in developing a de-centralized search, or to just escape Google for once: It might be worth trying one of the search technologies depicted above, just to see what it’s like outside the Googleverse.