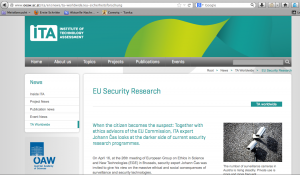 Just recently the Institute of Technology Assessment Vienna (ITA) relaunched its website. Along with the new Website it entered the so-called Web 2.0 including Twitter & Facebook. Having followed ITA’s way into social media, I realized that creating an institutional Web presence is not as easy as writing an individual blog. Questions popped up that I never thought about when writing my own stuff: Who is speaking in the name of ITA? What philosophy, political stance  or “Blattlinie” is followed? How much interaction is wanted? AND – last but not least – who is maintaining all these new media arenas and filling them with content, news and “updates”? Just like classical PR social media maintenance is a lot of work and needs to be done on top of everything else..

Despite all these challenging questions ITA has managed to appear in this “networked news ecology” (Felix Stalder) – co-performed by human and algorithmic practices. If you’re interested in the growing role technology – ranging from digital media, surveillance cameras, nano technology, smart grids to synthetic biology – plays in science and society I recommend following ITA news on its website, as well as ITA updates on Twitter and Facebook. I’m sure you’ll LIKE it!!!