These are some thoughts on the SuMa conference in Berlin, that I originally posted on the HUMlab blog:

Last week I spent a wonderful time in Berlin. I went there to pick up the SuMa Award my PhD “Mediated Knowledge” (download) received from the “SuMa-eV – Verein fuer freien Wissenszugang”, which makes me very happy!! The society annually awards works dealing with the future of digital knowledge ranging from scientific research, artistical approaches, to technical contributions such as search engines (check out the application deadline in spring!). Besides my PhD, the search engine “NewsClub im Bundestag“, the online dictionary “Linguee“, the scientific search engine ”BASE” and the satire “Google Home View“ were awarded this year. More Infos on the SuMa society could also be found here. 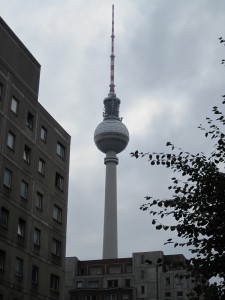 The award ceremony took place on the 6 October as part of the SuMa conference. The central goal of the conference with the title “what needs to be done” was to find ways how the German/ European civil society may shape the future of the world wide web. The title of the conference indicates that the conference organizers, most importantly the director of the society Wolfgang Sander-Beuermann, do not only aim to discuss, but rather to actively participate in the shaping of digital futures. Guiding questions for this challenging undertaking are how could free knowledge exchange be assured? What do we, as a society, know when knowing is equated with Googling? How could transparancy, data security and privacy guaranteed? And what is the role of civil society?

To answer these questions different actors were invited to the discussion including information scientists, policy makers – both German and European, as well as members of the civil society such as activists, bloggers and journalists (for details check the conference programme). While the morning sessions were primarily concerned with the way network technologies change institutions and concepts such as libraries, magazines and knowledge/ information in a broader sense, the afternoon sessions were mostly dealing with privacy issues, data security and legislation. The collision of these different viewpoints clearly showed the challenges involved in creating a digital future meeting all our needs.

One of the challenges is to harmonize local regulations with global trends. US American companies such as Google or Facebook pose privacy issues, that reach the limits of European and local legislation, not least when thinking of contemporary debates around Google Street View. Another challenge seems to be the fact that politics is increasingly overruled by commerce. Regret was expressed amongst some participants that German legislation would be too strict and thus prevent German search engines to grow and compete with global players. But should the answer to that be a liberation of local regulations to compete with the US American economy? Or could (should?) countries such as Germany not rather figure as a critical voice in the global concert and strengthen alternatives to money-driven developments?

This question closely relates to the final discussion on the role of civil society in shaping our digital future/s. While the panel “what politics can do” did not really provide answers, the panel with proponents from the civil society seemed more promising to me. Initiatives such as the European hacker association “Chaos Computer Club” aim to bridge the gap between technical and societal developments, a gap that is no longer filled by science according to the speaker of the CCC Constanze Kurz (an interesting thought that needs further consideration when thinking of Google as a search engine, that originally grew out of the scientific arena, for example). As time went on the discussion crystallized around the question how to strengthen such initiatives. Lars Reppesgaard, the author of the book “Das Google Imperium”, asked whether a bigger, more prominent actor is needed. 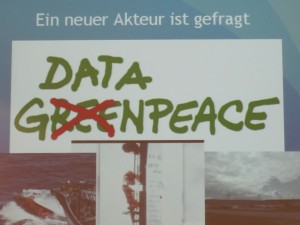 Referring to Greenpeace he suggested “DATAPEACE” as a powerful actor, that may better fulfil the role of critically reflecting and actively contributing to the shaping of our networked world. I want to conclude with this suggestion and leave it to the readers to think it further. Since these discussions took place in the German context, it would also be interesting to hear about debates in other cultural contexts such as the Swedish one. Are there similar/ divergent debates? What could we learn from different contexts? Answers are highly welcome..

Personally, I really enjoyed the conference and all the interesting conversations! I want to thank the organizers for inviting and awarding me, and all the participants for sharing their thoughts – both in public and private discussions! Good luck with all your future initiatives and events, it’s important to keep asking “what needs to be done”, even if there are no simple answers to this question. Finally, I also want to thank my friend Axel for letting me stay at his place and showing me all the great restaurants and bars. Berlin is always worth a visit!

The SuMa-eV is a society with the central goal to assure free access to knowledge. In their doing they particularly focus on search engines, that have become central access points to the web and digital knowledge. Their ideology basically is to work towards a landscape of free, heterogeneous, and non-monopolistic search engines. More concretely, their goal is to raise awareness and information/ digital skills in the public and policy realm, but also to develop alternative technologies. You can get more information on SuMa technologies including a link to the SuMa blog here (in German, sorry for that).

In addition to these activities they anually award works dealing with the future of digital knowledge. And I’m really happy that I get one of these SuMa Awards this year!!! Besides my PhD “Mediated Knowledge” (download), the OpenGovernment search engine “NewsClub im Bundestag” and the online dictionary “Linguee” are awarded this year. The award ceremony takes place on the 6th of October in Berlin as part of the SuMa-eV conference. I’m really looking forward to this event, especially as it nicely fits to my new project on the social construction of search engines and their information political implications. I suppose it’s a good spot to get to know relevant people in the field and their perspectives on search technologies. I’m particularly looking forward to see Markus Beckedahl from Netzpolitik.org, a platform dedicated to freedom and openness in the digital age, and Lars Reppesgaard, journalist and author of the book “Das Google Imperium”. Futher, proponents from the policy realm and the commercial sector such as Microsoft and maybe Google will be there. Altogether I think it’s a good compilation of different actors and viewpoints to start off a discussion about civil society in the information/ digital age. Besides, there will also be a workshop how to install your own search engine. For more infos on the programme and registration please go to the conference website. Personally, I’m pleased to finally meet the director of SuMa-eV, Wolfgang Sander-Beuermann and Theo Röhle, who just published “Der Google Komplex” – with both of whom I only digitally corresponded so far ;). So I’m really excited about this upcoming event & keep you posted on all that.