If you’re an academic you most probably know these nasty peer-reviews rejecting your hard work. These reviews written by your „peers“, who are supposed to make a responsible decision, but use their powerful role to let off steam instead. Reviews that constist of a couple of lines without a single in-depth argument about the value of your work or lack of thereof. These are disappointing. Especially for someone like me, who takes a lot of time to write a thorough review (somewhat naive and not sufficiently familiar with the academic game yet).

However, these are even more disappointing in the context of our changing academic/ research landscapes. The more dependent (young) researchers get on these reviews – not only in terms of getting their articles published, but more importantly in terms of getting research grants and jobs – the more weight these reviews and the people writing them get. In a time of economic crisis and budget cutbacks nasty reviews might become a nail in the coffin of an early-stage researcher’s career. That is why I would like to make a plea to all the „blind reviewers“ out there – especially those who have been socialized in a university system with lifelong positions free of evaluations or agreements of performance – to write responsible reviews (not necessarily positive, but fair). For those of you, who are annoyed by unjustified review(er)s I suggest listening to „never enough“ by The Cure – I’m sure you’ll find some parallels to the absurdity of the academic world. Enjoy!

Yesterday I gave a talk in HUMlab: “Search technology in society. Constructing search engines, shaping knowledge”. I was excited to present and discuss my research in this vibrant space and get feed-back from the wonderful HUMlab crowd! I really enjoyed the discussions that even continued after the talk – thanks for that!

Since the lab is not only a physical space, but also a highly digital space or “media place” – as the director Patrik Svensson himself often calls it – the HUMlab seminars are also live streamed and archived. I highly recommend to check out this rich repertoire of HUMlab lectures that goes back to the year of 2002 (!). The seminars are primarily dealing with research/ theories of the digital humanities, but also new media studies, digital sociology and related fields. This video archive assembles exciting scholars such as Whitney Trettien, Alan Liu, Rita Raley – just to name a few of the most recent speakers – and covers a wide variety of issues such as reading and writing in the digital age, cyberarcheology, digital modernism, online art production, file sharing communities and many more as you will find out here.. I’m really happy to be now part of this truly great video archive

Check out the SuMa Awards 2011 by the SuMa-eV. The SuMa-eV is a society with the central goal to assure free access to knowledge. In their doing they particularly focus on search engines, that have become central access points to the web and digital knowledge. Their central aim is to work towards a landscape of free, heterogeneous, and non-monopolistic search engines. More concretely, their goal is to raise awareness and information/ digital skills in the public and policy realm, but also to develop alternative technologies.

In addition to these activities they anually award works dealing with search engines or the future of digital knowledge in a more broader sense. That’s how they describe their call:

Our aim is to focus attention on search engines’ role in providing access to online information. The awards address all members of society: artists, scientists, journalists, parents, teachers – everyone who has something to say about the way search engines shape their information environment is welcome to send in contributions.

Our goal is to encourage public debate about the importance of our information environment for the future development of society. We want to spur innovative approaches to all aspects of search engines, not merely to the technical characteristics.

We welcome contributions in any format: text (scientific, journalistic, legal, literary, etc.), audio, video, multimedia, code, or any manner of artistic expression. They may take any style or mood, whether it be analytical, provocative, descriptive, or other. For inspiration, take a look at last year’s winners or at our project gallery. Anyone may take part – simply send your project description to: info@suma-ev.de.

I came across a couple of really interesting grassroots initiatives in the context of net politics recently, which I’d like to share today. In the course of the annual re:publica conference (Berlin, 13-15 April) quite some net initiatives have been launched in Germany. First of all, the Blogger Markus Beckedahl from Netzpolitik.org and others have created the non-profit association “Digital Society”. Its main goal is to launch critical campaigns concerning issues such as data privacy or the widely debated law on Vorratsdatenspeicherung (data retention). If you’re interested in this newly constituted association you might want to watch the interview with Markus Beckedahl on the re:publica channel here (in German): 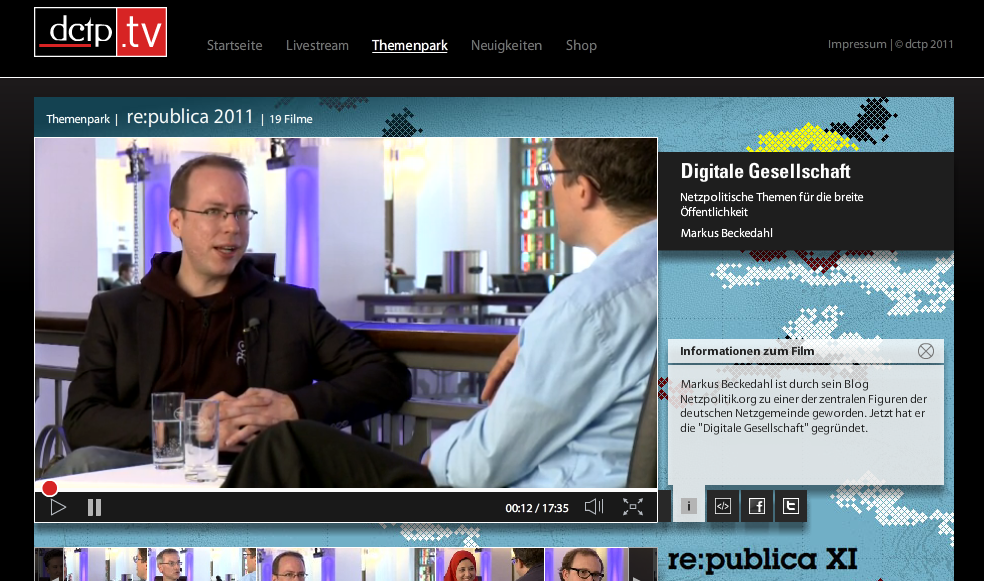 – Amongst other interviews such as the one with Maxwell Salzberg, the founder of the social networking platform Diaspora (see also blogpost goodtosee #1). Concerning Vorratsdatenspeicherung I also recommend to check out Florian Klenk’s blog post “Bringt dieses Gesetz in Brüssel zu Fall” or the Facebook group “Stop Vorratsdatenspeicherung“.

Moreover, Wolfgang Sander-Beuermann from the “SuMa-eV, Verein für freien Wissenszugang” (see also this blog post) has formulated a proposal against the increasing “dominance of the Internet by global online companies”, as may be read on the SuMa-Ev Website (in German again):

He put forward his suggestion to the newly installed Enquete Commission “Internet and Digital Society” of the German Bundestag. If you would like to support this initiative you can vote for it here:

Finally, the book “Datenfresser. Wie Internetfirmen und Staat sich unsere persönlichen Daten einverleiben und wie wir die Kontrolle darüber zurückerlangen” by Constanze Kurz (Chaos Computer Club) and Frank Rieger may be interesting to read. It treats an increasingly important issue, the collection and commodification of our data by Internet companies, but it also seems to go beyond that by showing us ways to protect ourselves. That’s the impression I got from their website at least.. I guess I’ll order it soon. If you come across similar, or also different initiatives, – please do post them in the comments! I’m sure there is more out there, also beyond the German border hopefully! (What about Austria or Sweden?)