I’m excited about the summer school season that’s starting soon! My first stop will be Amsterdam, where the Digital Methods Summer School is taking place from the 27 June till the 8 July. It will be fun to meet Richard Rogers, the organizer of the summer school, and his team again and share ideas, empirical insights, and “digital tools”. The program looks amazing and there’s going to be a great number of participants from all over the world (see also this blogpost).

My second stop will be Vienna, where I’ll attend the Marie Jahoda Summer School of Sociology dealing with Economy–Markets–Organizations: The Culture of modern Economy.

Like all economic processes, markets and organizations are embedded in social structures. Cultural values and political decisions strongly influence economic action, and economic processes follow social norms. The culture of markets transcends the homo oeconomicus. As the new economic sociology has shown, economic action, whether it takes place on markets, in organizations, in networks or as self-management, has to be understood as multi-dimensional and is not bound to an economic rationality existing outside social relations. In this perspective, current processes like the “economization” of social fields become themselves visible as cultural patterns of social organization.

The Marie Jahoda Summer School of Sociology will be set against this thematic background. We will examine competition, firms, management practices and organizations in the economic field, extending it to the arts, religion, sports, fashion, pop culture or the media – social fields, which themselves are examples of today’s “culture of markets”.

It will be really interesting to go back to the Sociology Department, where I studied more than 10 years ago! I’m sure a lot has changed in the last decade and I’m curious about the current state of the field. There will be 19 participants, mostly from the German-speaking context, and I’m happy to be one of them. The summer school will be an excellent opportunity to present my work on search engines in the context of present-day market capitalism and gain feed-back from Austrian/ German researchers. I’m particularly looking forward to  meeting Sighard Neckel, the organizer of the summer school – who kindly invited me to take part in this event – and his collaborators.

I do really like when netpolitics turns into an actual practice, such as the one I’ve just recently learned about in my firefox browser. It’s called Make Your Mark and encourages people to leave a mark to show “support for a people’s web”.

The project is a collaboration between the non-profit organization Mozilla and Evan Roth, an artist and researcher investigating the intersection between free culture and popular culture. Further, the project is supported by the open net advocate Lawrence Lessig. By making your mark you are indicating that you also believe that (according to their website):

The Web is an integral part of modern life.
It is an educator, a communicator, an entertainer, an inspirer, a collaboration of all our creative efforts.
It sparks movements and enables us to share our ideas, our thoughts, our dreams.

The Web is our creation.
We are all contributors, the ones who use the Web every day.
And all the comments and uploads we make add up to something bigger.
This is why we believe that the Web must remain open and accessible to all.

Mark Up is a celebration of that freedom.
Each person’s mark is an individual expression on a continuous line symbolizing solidarity.
It is a declaration and a chance to show your support for a people’s Web.

So if you identify with that then leave a trace on the web, as I did (maybe an even more creative one 😉 ): 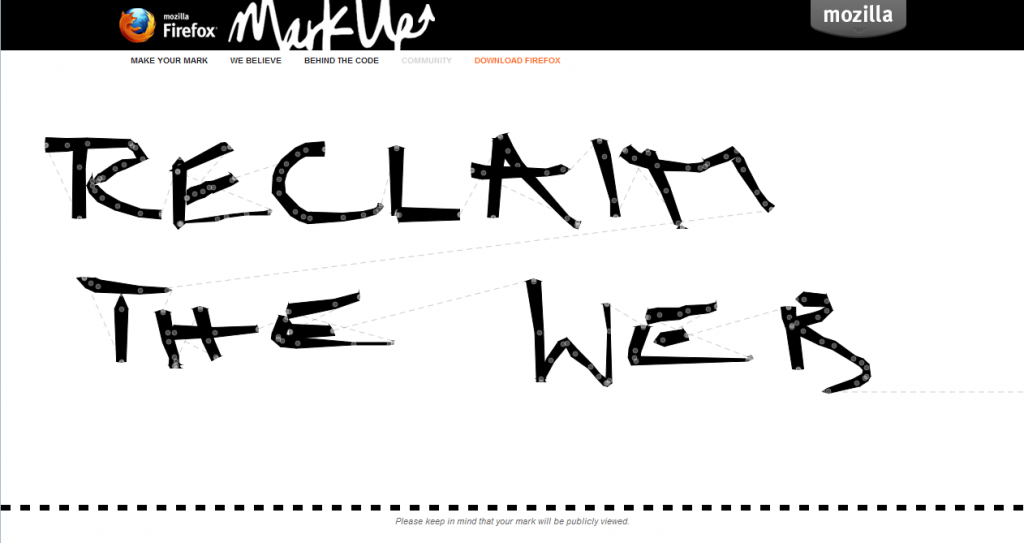 Another really great example of netpolitics in practice is the Firefox add-on: Track me Not. This application was created by Daniel C. Howe, Helen Nissenbaum and Janoss and helps you to protect yourself from surveillance and data-profiling by search engines. It does so by irritating search engines such as Google by creating noise and obfuscation. 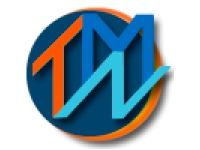 Practically, this means that the app sends random search queries to search engines such as “Muddy River uses” – the one that’s displayed in my own browser right now. You see, it’s not only useful, it may also be highly entertaining given the stupid queries it sends 😉 More info and download here. Because using the web and getting exploited by big Internet companies must not necessarily be the same, even though it is often case unfortunately..