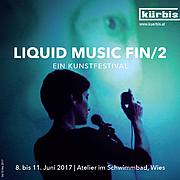 That was fun! Katja Mayer and I attended Liquid Music in Wies (Styria) this year and we took the opportunity to try out something new. Instead of presenting societal implications of biofeedback 2.0, we performed as “good bot & bad bot”. Following the logic of our written essay – yes, there’s a book too! – we personalized both euphorical (good) and critical (bad) socio-political implications of biofeedback out of the pocket; e.g. health apps, wearables etc. While doing this, we visualized our own biofeedback data with an installation by alien productions (Martin Breindl, Norbert Math, Andrea Sodomka) = Autoregulative Spaces. The Quantified Self, the core piece of the whole event.

Here‘s the link to the full program of the festival! 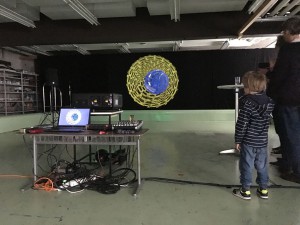 Given the fun we had and the great feedback we got, we’re currently thinking about advancing and refining out bot performance.. so stay tuned! 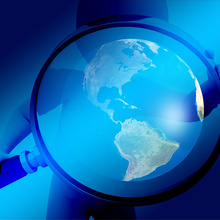 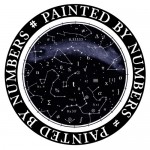 I just came back from a truly amazing travel through South Africa and Mozambique (see also fotos below). Even though my talk at the Witwatersrand University did not work out in the end (be aware: an African YES should not necessarily be taken at face value..) I stumbled across a range of interesting people and projects. Travelling with Machfeld – Sabine Maier and Michael Mastrototaro – and their experiences and friends helped in this respect:

Marcus Neustetter and Stephen Hobbs showed us the newly emerging district “Arts on Main” in Johannesburg. It’s a lively area with a gallery, the Goethe institute, restaurants and a hotel, where each room has been designed by a different artist reflecting different time periods. 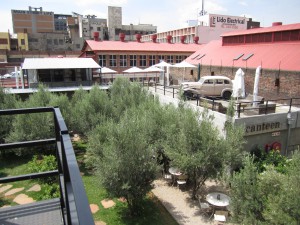 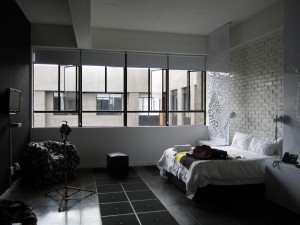 Further, we visited the “Bag Factory” where Machfeld used to work as part of their artist in residence program (check out the Bag Factory’s website if you’re an artist interested in staying at Joburg for a while!). That’s how they present themselves:

“One of Joburg’s leading visual arts organizations, the Bag Factory has been alive and kicking since 1991, when the space was set up to provide studios for artists – mainly black artists, who at that stage, had very little access to networks and resources in order to build their careers.”

One of these black artists is the photographer Raymond Marlowe, who just recently had his solo exhibition “Narciso Road, Eldorado Park” telling stories from life in Soweto, one of the biggest Townships of Johannesburg. I’m still very happy that Raymond took us to his house and showed us around in his home town!! 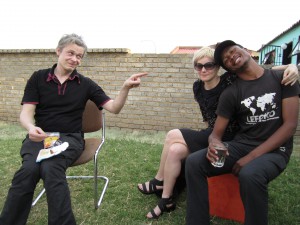 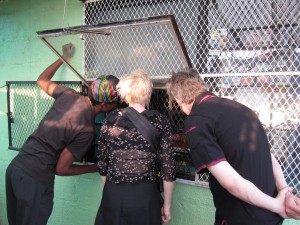 Travelling to the amazing beaches in Mozambique we stopped by in Maputo to visit the Austrian musician and photographer Werner Puntigam. While Maputo itself seems to be pretty fucked up we had a great time and met some cool young artists. Especially Joao Paulo Queha made a huge impression on me: As part of the artists’ collective Nucleo de Arte he makes beautiful sculptures out of weapons. 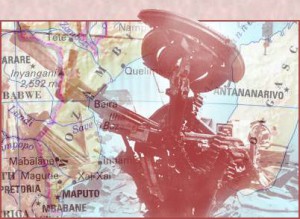 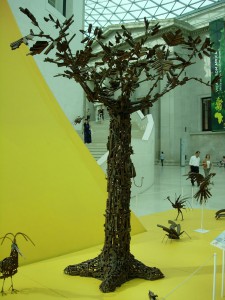 Since the end of Mozambique’s sixteen-year civil war, more than 72,000 weapons and explosives have been collected from the country’s landscape. During the past few years, the artists’ collective Nucleo de Arte turned machine guns, landmines and hand weapons into beautiful sculptures, sometimes fragile and elegant, sometimes big and robust such as the “tree of life” on the right side (photo credits: Nucleo de Arte & Inspiring Cities).

Finally, I would like to refer to a really nice ICT project in Zimbabwe: Tonga.Online. On their website you could read that “the project derives its domain name, Mulonga (meaning River), from the local Tonga language.

The name reflects the history and needs of the Tonga people. On one level, the Zambezi River, also known as Mulonga, has become a symbol that tells a modern story of the development of massive but unshared technology – the construction of Kariba Dam on Tonga homeland. Mulonga constantly revokes memories of how the Tonga people were displaced, nearly 50 years ago, to make way for the building of this dam. On another level, the constant flow of the Zambezi is a symbol of continuity which, today, represents the needs of the Tonga people both to communicate amongst themselves and with others, and to preserve and develop their rich cultural heritage. The Tonga.Online Project seeks to establish and expand communication infrastructure with and amongst the Tonga by joining them with modern information and communication technology (ICT).”

Travelling through the countryside in Mozambique made me understand why projects such as Tonga.Online are really important. While some parts of Africa – especially big cities such as Joburg and Maputo are well connected – other parts of Africa are still widely offline (having trouble to keep up the electricity in supermarkets and to fulfill the basic needs of its poor population).