And yet another pretty cool event I’ll attend in March (8-10); without presenting though. It’s the second event of the Unlike Us Network initiated by Geert Lovink (Institute of Network Cultures/HvA, Amsterdam) and Korinna Patelis (Cyprus University of Technology, Limassol). It’s supposed to bring together artists, designers, scholars, activists and programmers who work on ‘alternatives in social media’. That’s how the event is described on the network cultures institute website:

Unlike Us 2 will focus on the concept of free exchange and the commercial exploitation of online social relationships which lie at the heart of contemporary capitalism. In addition to speakers addressing this theme a range of alternative social media projects will be showcased. Facebook makes everyone believe There Is No Alternative, but Unlike Us dares to differ. – I’m curious about that! 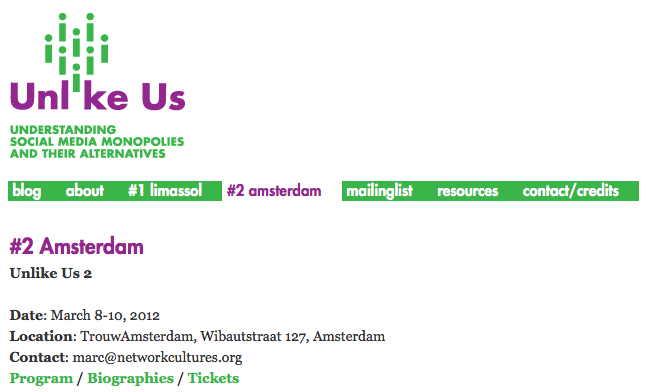 I just got an email that the abstract for my talk “Defining Algorithmic Ideology: Using ideology theories to understand and critique corporate search engines” has been accepted for presentation at the Critical Social Media/Information Society Conference in Uppsala. The keynote speaker line-up is impressive including Vincent Mosco, Andrew Feenberg, Charles Ess, Christian Fuchs, Trebor Scholz, Ursula Huws talking about “Virtual Work and the Cybertariat”, and many more… I’m sure it’s gonna be an exciting event & I’m glad that I’ll be part of it!

Also, going back to Sweden in spring will be great! – I hope to see Mike Frangos there too!!! Anyone else? Just drop me a line..

& that’s how I’ll use critical theory to define Algorithmic Ideology:

Corporate Internet technologies like Google, Facebook and co. have been described as mirroring the “Californian Ideology”. Google, in particular, has been interpreted as a paradigmatic example of a company deeply rooted in the economic culture of Silicon Valley with a strong belief in information technology and the free market. While the concept of the Californian ideology helps to understand this newly arising techno-fundamental business culture, it fails to critique corporate search engines and their capitalist ideology. Big, universal search engines should not merely be seen as technical solutions for societal problems, as they often are – most importantly by Google itself – but rather as incorporating a “new spirit of capitalism” (Boltanski and Chiapello 2007) and exploitation schemes that come along with it. Previously, I coined the term “algorithmic ideology” to show how the new capitalist spirit gets inscribed in search engines by way of social practices.

In this paper I aim to define the term algorithmic ideology. Drawing on critical theory I argue that ideology could be a valuable tool to understand and critique the commercial dimension of search algorithms and their power in contemporary society. Following Althusser (1971), for example, I exemplify how the capitalist ideology gets materialized in corporate search engines and algorithmic business models. Through their algorithms corporations like Google exert their power, indoctrinate users, and create desire. By providing their services for free (and collecting user data instead) they extend their hegemony (Gramsci 1971) by attracting and integrating users in their “capital accumulation cycle” (Marx 1867, see also Fuchs 2011). In turn, user communities may be seen as (unconsciously) practicing and stabilizing the capitalist ideology by incorporating search services in their daily online routines and turning to Google & co. for advertising and consumer purposes. This way the “culture industry” (Horkheimer and Adorno 1969) and its ideological superstructure are inscribed in, transformed, and spread through supposedly neutral search algorithms.

This analysis points out how ideology theories could be used to develop a notion of algorithmic ideology encompassing materiality, institutions, and practices anchoring and reproducing contemporary capitalism. Instead of a mere belief in technology and global business, algorithmic ideology should function as an analytical framework to analyze and critique corporate search engines and the social order they perpetuate. Only when understanding how present-day search engines further global capitalism resistance and strategies for achieving alternative algorithms for a mores sustainable and democratic information society could be developed in the future. Whether a “radical repoliticization of the economy” (Žižek 1999) may be a first step into this direction and what role the state could/ should play in this undertaking will be finally discussed.

This research is carried out as part of the project “Glocal Search. Search technology at the intersection of global capitalism and local socio-political cultures”, funded by the Jubiläumsfonds of the Oesterreichische Nationalbank (OeNB).

I’m happy that my abstract for the Oxford Internet Institute (OII) symposium “Interdisciplinary Insights on the Social Science of Digital Research” got accepted! I’ll be talking about the “the performative character of digital methods”. I’m already looking forward to seeing Malte Ziewitz, Jean-Christophe Plantin, and other exciting Internet researchers again!!!

The performative character of digital methods

Scholars following the tradition of the Actor-Network Theory (ANT) have argued that methods do not simply report on a given reality, but rather enact social reality in a certain way (Mol 2002, Law 2004). Methods make “certain (political) arrangements more probable, stronger, more real, whilst eroding others and making them less real.” (Law 2004: 149). Accordingly, it has been shown that research objects are differently performed in different empirical settings rendering them slippery and multiple. This argument becomes particularly striking when thinking of various digital methods performing and depicting web realities in distinct ways, as I will illustrate with my own research. Concretely, I will address the peformative character of digital methods by drawing on an ongoing research project investigating how the biofuel controversy is represented in search engine results compared to classical media; with a particular focus on Sweden (project conducted together with Jenny Eklöf from Umeå Studies in Science, Technology and Environment, Umeå University; data gathered from April 2011-November 2011).

For the purpose of this article, I draw on Google search queries we conducted with a range of different keywords and juxtapose them with hyperlink network visualizations we developed with the software Issuecrawler (from the Govcom.org Foundation, Amsterdam). I will discuss strengths and weaknesses of both methods in terms of understanding how the biofuel issue plays out in search engine results and how link networks contribute to these search results. More fundamentally, I will show how the choice of method shapes the object of study by using concepts from ANT. I will elaborate that observing search results over time enacts the web as a search-engine organized information space and performs search engines as central gatekeepers. Contrary, hyperlink network maps evoke the imagination of the web as a de-centralized information network configured by link connections. Based on this analysis, I will discuss how different digital methods – network visualization tools in particular – bring different aspects of the web to the fore, while hiding others in the background according to the different algorithms they incorporate. Digital methods should thus not be seen as passively representing web reality, but rather as actively shaping the web realities we try to observe. What “ontological politics” (Mol 2008) this implies and what consequences it involves for Internet researchers and the emerging discipline of “digital research” or “e-research” increasingly drawing on (network) visualizations, will be finally discussed.

This research was funded by my HUMlab postdoctoral fellowship (September 2010- February 2012).

…I totally forgot about during my stay in Sweden:

* doing laundry in my apartment – yes, just right here!
* hanging out with old friends in coffee shops, bars and fancy restaurants – service included!
* waking up next to my boyfriend.. everyday!

work-life balance, here I come! HAPPY NEW YEAR! 2012 is gonna be a great one!
@ Umeå people: drop me a line whenever you come to Vienna or nearby.. would love to see you again!