I just returned from Gothenburg, where I had a really good time at the AoIR conference (21-23 October). Although feeling a little exhausted, I still try to summarize some interesting ideas I took home from “the South”. This, of course, is not meant to be a full review of the conference, since 6 parallel sessions are hard to attend simultaneously (even to follow all of them on the twitter channel was overwhelming). Contrary, I just want to selectively discuss inspiring talks and thoughts, probably strongly biased by my interest in search engines and knowledge production, as well as my affiliation to HUMlab. 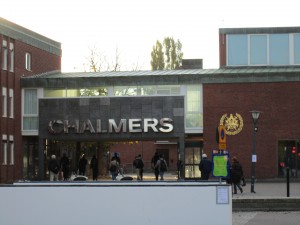 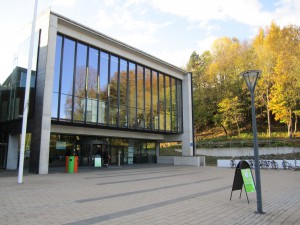 Day 1: In the first session I attended I found the talk by David Kurt Herold on “China’s internet users as the glue that keeps society working” most amazing. Davin Herold showed that Chinese use the web to help each other against crimes and abuse in cases where legal or social institutions failed. He discussed “human flesh search engines” indicating that users put information on criminals online and let others track down and punish these people with the help of the web (pretty frightening when thinking of the possibility that innocents may become victims of these “online punishment” strategies). During this excellent talk I realized that there is so much media coverage on China and Internet censorship, but little is known about the actual use of the web by its Chines users.

After that I attended a panel on the Internet of affect. The basic idea of this panel was to discuss emotions internet researchers have when investigating and using the web. Surprisingly emotions such as fear and anger were high on the agenda. Sally Wyatt, however, suggested boredom and coined internet use as a form of “domestic labor” – most particularly in regard to online health information, which I find an interesting thought. After that a long discussion evolved around the “economy of attention”. In this context I asked myself whether the desire for attention is something inside of us, or whether it’s – at least partly – triggered by the technology providing a network of surveillance services when thinking of Google analytics, but also the like and comment functions on facebook & co. 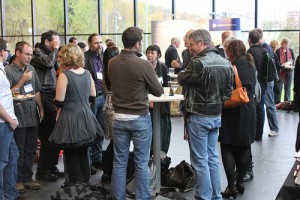 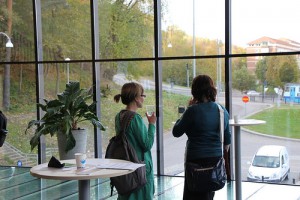 After lunch I most particularly appreciated Christian T. Callisen’s talk about the history of social networks. He discussed the “Republic of Letters”, a virtual community way before the Internet. In the 17th century intellectuals both from Europe and the US exchanged letters to transcend national boundaries and establish a metaphysical republic. I think this is a brilliant historical case study, that shows that we can learn a lot from history when trying to understand present-day virtual communities and social networks. In the evening of the first day we all went to the reception in the beautiful “Börsen” building, where I had a really interesting conversation about Google books and copyrights issues. After that we ended up in the pub “Bishops Arms”, which showed me that Bishops Arms in Umeå is by far not the only one in Sweden. Hm.

Day 2: The next morning I attended the session “Unlikely players and playing”, where my HUMlab colleagues Emma Ewadotter and Calle Engquvist were presenting their work on the power of gamers or the “artist as an activist”. They elaborated that users of the game “Planet Calypso” had a hard time to accept equipment for free, which Calle gave away as an art intervention. Particularly in respect to violent games such as “Left 4 Dead”, which was presented by Staffan Lennart Björk, I started wondering why users have a hard time to accept gifts, while they don’t seem to have problems with wildly shooting and kicking. – what a funny age we’re living in.

In the afternoon I enjoyed the panel “Google this. How knowledge and power work in a culture of search”. Ken Hillis, Michael Petit and Kylie Jarrett have put together a really interesting panel on the power of Google. Kylie Jarrett drew on Bourdieu to discuss the symbolic capital or “meta-capital” of Google, that allows it to define what can be used as capital in many arenas. Michael Petit discussed that McLuhan’s notion of “the medium is the message” may be seen as particularly applying to search technology, since users create their own results. In many cases search could no longer be seen as a means to an end, but has become an end in itself. Ken Hillis was finally talking about the metaphysical assumptions that underlie Google and search practices in a more general sense. He argues that Google has the influence to shape how people think in terms of making everything searchable, which well-corresponds to our need of efficiency and speed, I guess. He further showed the quite amusing website “The Church of Google” elaborating why Google may be considered as God.

Considering all these issues discussed in the panel I’m already looking forward to the book on “Google and the culture of search” Hillis and Petit are currently working on, stay tuned!

Day 3: I started with the panel on virtual worlds organized by my HUMlab colleagues Jim Barrett, Mats Deutschmann, Jenna Ng, and Stefan Gelfgren. Mats was talking about second life as a learning environment, that has the potential to break down hierarchies between teacher and student and trigger “communities of practice” instead. Jim was talking about aboriginal narratives and how second life could help to teach and learn Sami language, which has different terms for the same object depending on the position of the object in space (if I got it correctly). Stefen was finally talking about Christian churches in second life and that they trigger pretty traditional praying practices. “A lot of praying 2.0 going on in Second life”, as Stefan put it. Unfortunately I missed Jenna’s talk, sorry for that!

After that I attended a panel on “Knowledge sharing, collaboration and attribution”. In this session I was primarily interested in (the rise) and fall of “Google Lively” presented by Isto Huvila. He was discussing that a lot of users migrated to second life when Google shut down its own virtual world. After that I felt exhausted and skipped the last session.

Altogether I perceived the quality of most of the presentations as very high (some more theory here and there wouln’t have hurt, but it was fine). Further, the twitter stream was filled with messages at an amazing speed. After having actively contributed on the first day I became a lazy twitterer, just because I realized that I got completely distracted from the actual presentations. Maybe someone can explain to me how to multi-task all that? Anyway, it was fun to follow all these tweets and see which pieces of work drew the most attention. By the way, that makes me think of Nancy Baym’s keynote on Swedish pop culture and online participation discussing how the notions of fan and audience change in the age of the Internet. – Being a heavy twitterer herself, I guess she was the one actually drawing the most attention; rightly as she held a very entertaining talk! 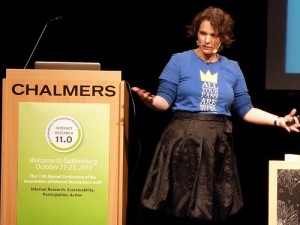 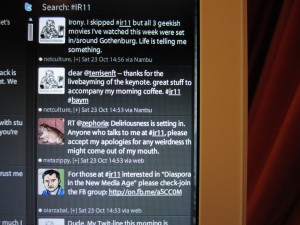 Photo credit for the left one: Jeffrey Keefer; on ir11 Flickr stream

Next year’s AoIR conference is going to be held in Seattle, hope I can get funding to go there!